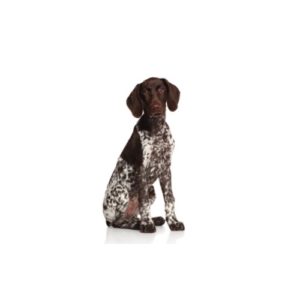 A hard-driving hunting dog possessing stamina, courage, and the desire to go, the Pointer is bred primarily for sport afield and definitely looks the part. He gives the impression of power and grace, with a noble carriage, an intelligent expression, and a muscular body. His short coat can be liver, lemon, black, and orange; either in combination with white or solid-colored.

Pointers first appeared in England around 1650 and were the first breed used to stand game. Before wing-shooting with guns became popular, Pointers were often used to locate and point hares in conjunction with Greyhound coursing. The Pointer's lineage is foggy, but there is no question that it includes Foxhound, Greyhound, and Bloodhound crossed with some sort of “setting spaniel,” which played an important part in the creation of all modern bird dogs.

The Pointer's even temperament and alert good sense make him a congenial companion both in the field and in the home, but he requires both physical and mental exercise. He should be dignified, but should never show timidity toward man or dog. The breed's short coat is easy to care for with minimal effort.